With the possible risk of boring hell out of everyone, here's another Shiprock vid.  This one mostly stills with a few clips stuck in.  I do have to say, my videos are the only ones that you might actually learn something about Shiprock from.  I caption the scenes, give direction and time of day.  You actually get a sense of the place itself.  After 40 years I know it like the creek bottoms I've hunted my whole life here in East Texas.

Shiprock Stills Video.
Posted by Robert Langham at 11:08 AM No comments:

Taken a while due to schedule but finally editing a couple.  This is all video clips of locations and lighting around Shiprock during my eight day trip out early in the month.

Here's a live link.
Posted by Robert Langham at 8:09 AM No comments:

Posted this last year probably but just uncovered the proof again in a mat while I was matting up some proofs to see who could survive the "wall test." 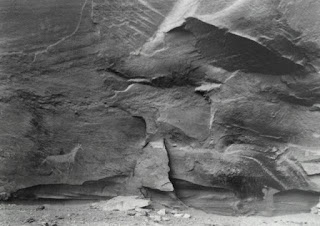 Posted by Robert Langham at 1:22 PM No comments:

Now to get them sleeved and sequenced and boxed.

Here's a little sample.  Some of them are scenes never seen before from Shiprock.  Others more common.  Some right at parking areas and others had a good bit of climbing and walking. 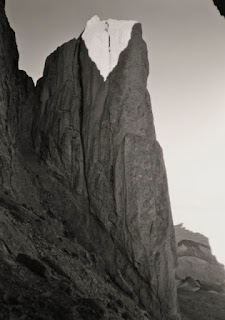 The White Tower.  120 Angulon backed into the last corner of a little ledge.  I didn't see the overhang in the upper right.  The camera was so tight up against the cliff that I couldn't get holders in and out.  Polarizer to cut the glare.  Looks like the horizon line has dissolved and the shadow is just hanging.  This was the further-ist spot for a climb into a place I had never been. 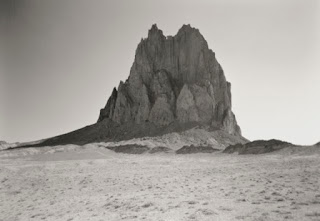 Southwest face.  Off the road that crosses the South Dike about mid-morning.  Yellow filter. 190 Wide-Field Ektar that I bought for 300 bucks at Kurt's Kamera Corral on Central Avenue in Albuquerque in about 1994.  It still has the price tag in one corner of the lens board. 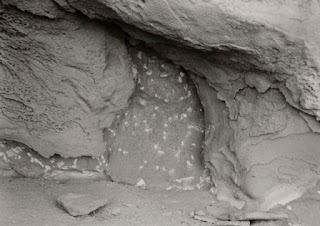 The Salt Cave.  120 Angulon.  No filter.  Tripod center column was hitting the ground.  Had to dig a few pebbles out so it would be clear. 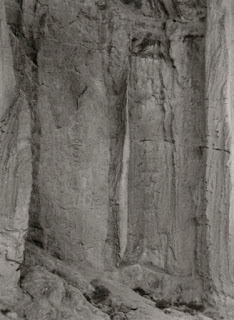 East face detail.  450 Nikkor.  Looking at this one.  Hard to know where to start and stop.  The light on the face was open shadow, but the plains bounce light back up better in other places.  Polarizer to cut reflections off the rock.  Tough camera position and a little bit of a struggle to get up the talus slope. 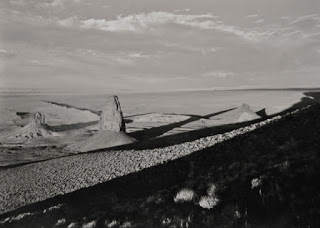 Little neck group in evening light.  120 Angulon.  Yellow filter.  Long slog to get up, with rattlesnake.    That's the main rock shadow all the way to the right.  Clouds coming and going.  We'll see.  Might be too much.  I was after the biggish neck with it's long shadow streaking out behind it, but would have to come later in the year.  The Sun was too far to the Northwest. 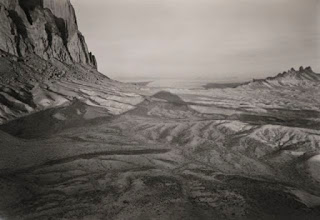 Afternoon light from the hill grave site.  120 Angulon and also a 190 version.  Have to be careful about shadows jumping ridges and distorting.  Yellow filter.  I was up here three times: scouting, dawn, dusk.  Have to lay them all out together in sequence.  I love this image. 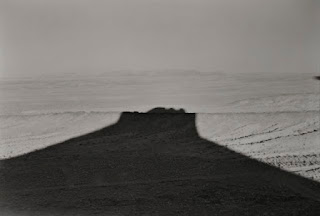 Little neck shadow jumping a dike.  190 Wide Field Ektar, Yellow filter or none.  Leaving the little shadow on the right side.  Needs it.  Had to really scramble to get this, then scramble again when I ran out of holders. 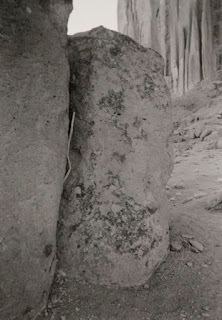 East face boulder field. 120 Angulon.  One of my favorite rocks at Shiprock.  Used to be quite a walk to get over to it, but now folks are driving all over the place and tracks come right up to it. 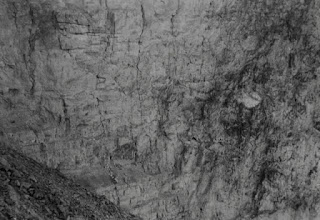 Little dots.  To go with The Dot.  I'd never seen these dots before and the camera position is on a loose fractured slope.  Sporty to the extreme.  190 Ektar, no filter.  May use a little negative retouching to firm up the main dot.  And then never print it.  From just off the ridge just below the Hermit's cave on the North shoulder.  Looks like an easy walk up.  It's not.

Shiprock has a sunlit side and a shadow side most times of the day and when the wind is blowing a windward side and a wind shadow.  I tend to try and keep all that in mind.  This day on the North shoulder there was a howling wind out of the West.  Then it died to nothing.  I hadn't shot a thing but noticed this wall and the little dots.  I got down this loose slope off the ridge when the wind died, but was uncertain about getting back up.  The slope only 60-80 yards...then a drop off.  Lonesome place. 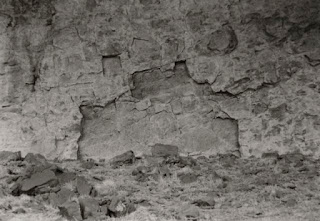 South dike detail.  East side of the South Dike in the afternoon open shade.  Polarizer.  450 Nikkor or the 12 inch Ektar.  Tough to get good camera position on the talus slope. 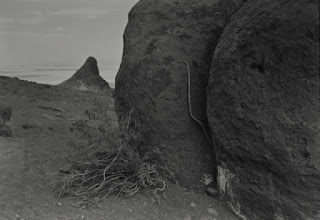 East face boulder field.  My favorite boulder again.  190 Ektar and a polarizer.  This is a little darker than a print would be. 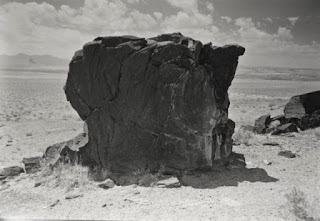 The Meteorite.  West dike.  190 Ektar and a polarizer. 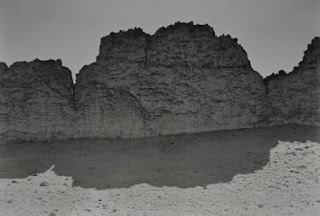 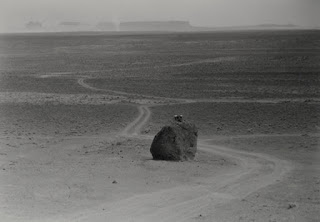 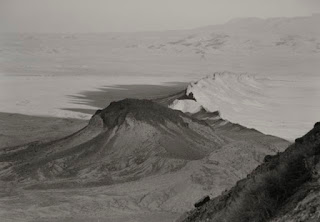 Morning light on the West Dike.  450 Nikkor and a blue filter.  No wind and a beautiful morning.  That dike shadow doesn't last long.  I took the shadow photo, (6 from the top), from that dark-topped hill. 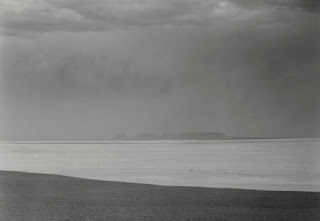 Table Mesa.  450 Nikkor during a dust storm.  They blew through in sequence about 30 mins apart. 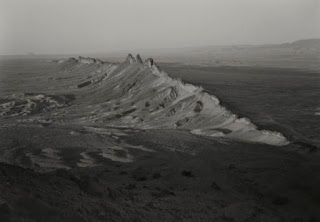 I had four lenses with me, all fixed lenses.  No zooms of course for the 5X7 Deardorff.  Some quite old.  I used all four.  120mm Super Angulon, 190 Wide Field Ektar, 12 inch Commercial Ektar, 450mm Nikkor.  Would have hated to be without any one of them.  Used a polarizer, yellow, orange, (once), blue and no filter.  Worked out of an old F64 camera pack exclusively.  No film holder problems.  Gitzo tripod with carbon fiber legs but a big heavy #4 head for stability.
Posted by Robert Langham at 9:26 PM No comments:

Chosen for a three-week slot on the South Rim.  Working out the dates and the details.  Very glad to get a slot.  I've got a body of work in mind, just need to arrange somewhere for it to be shown afterwards.
Posted by Robert Langham at 11:09 AM No comments:

Eight days in the desert produces a lot of exposed film.  I'm working through the boxes without hurrying or cutting corners.  About 180 shots.  I'm using Xtol 1:1 and 68 degree water.  The film is HP5 and FP4. 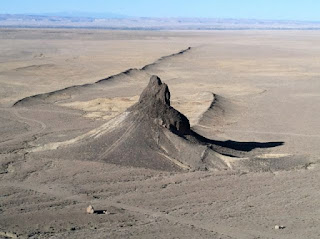 I unloaded and reloaded film holders every evening and in the middle of the day.  At night I waited until full dark after 9:30.  When the sun was up,  I had to have a session in the deepest shade I could find to park.  I put my arms through the sleeves of my fleece North Face jacket to block out any armhole light leaks into the bag, hung a sleeping bag over the seats to block the light and put the dark cloth over the bag.  No film light leak problems so far and I am about halfway through. 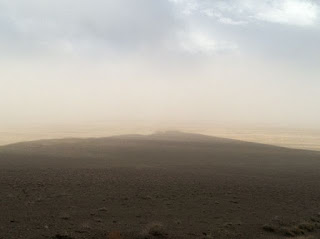 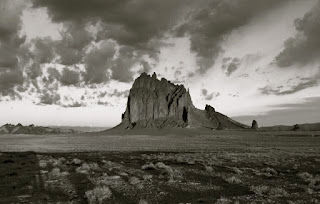 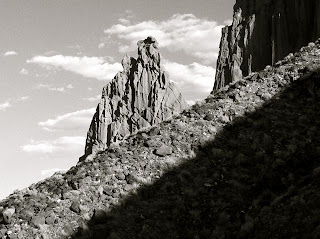 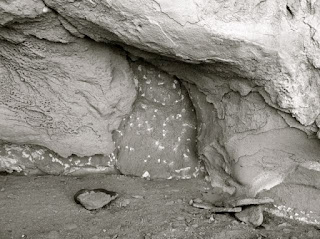 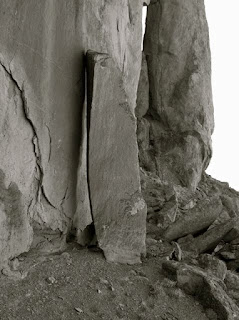 Leaning slab under the White Tower.

The most runs I have made in a day is seven.  The limiting factor is having to make ice to produce enough cool water.  Tap water is running about 91 degrees.


Posted by Robert Langham at 11:32 AM No comments: